Home » Malware » What is a Trojan Virus?

What is a Trojan Virus? 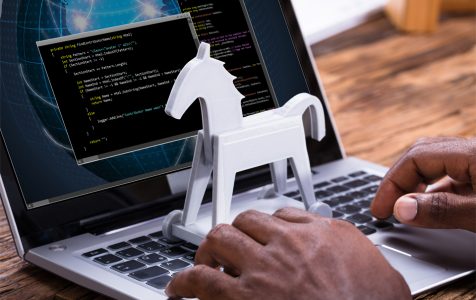 A Trojan or a Trojan horse virus is a type of malware that often disguises itself as a legitimate software. It is named after the Trojan War in which the Greeks craftily sneaked soldiers into Troy inside a wooden horse that was supposed to be a gift. Similarly, a Trojan malware will sneak into your computer by “pretending” to be a harmless program, only to serve as a conduit for hackers and other malware to enter into your system.

Trojan horse viruses have a long history and were first brought to the public’s attention by Ken Thompson, a Turin Award winner in 1974. Over the years, there have been many famous Trojan horse viruses, such as DarkComet, (NSA), WARRIOR PRIDE (FBI), and Magic Lantern (FBI).

How Do Trojans Work?

Most Trojan attacks are based on deception. You might receive what seems like a genuine attachment on your email and upon clicking on it, it unleashes a Trojan attack. Similarly, you can download a software package from the likes of The Pirate Bay only to find that a Trojan has been bundled together with the software package.

A Trojan horse virus will also try to exploit vulnerabilities in older browsers or Windows apps that haven’t been updated for a long time. Once a Trojan virus enters into your computer, it can open backdoors to other malware and sometimes, even hackers who steal private information. The stolen information can then be used for blackmail campaigns or for identity fraud.

There are very many types of Trojan horses. Here are a few of them:

Emotet banking Trojan is one of the world’s most famous Trojan horse viruses. Discovered by security researchers in 2014, Emotet works by stealing private information from a computer. The information can then be used to perpetrate financial and identity fraud.

According to some estimates, the Emotet malware is responsible for 45% of all malicious URLs on the internet. A typical Emotet attack begins with a phishing email with an attachment. Clicking on the attachment installs the virus on your computer.

Rakni Trojan is a ransomware that spreads through spam mailing with malicious attachments. Once inside your computer, the Trojan will encrypt all your files and demand a ransom to decrypt them.

How do you deal with a Trojan Virus? The easiest way to remove a Trojan from your computer is to use an antimalware tool. You can also use a PC cleaner tool such as Outbyte PC Repair to clear the spaces that a Trojan would normally hide.

A PC repair tool will also keep constant vigilance on the health of your computer. If your network slows down in unexpected ways, for instance, due to activities of a Trojan horse, the PC repair tool will notify you that something is not right. It also monitors background processes, and reports on anything suspicious.

How Can You Prevent Trojan Virus from Infecting Your Computer?

Apart from installing an antivirus software, there are other steps that you can take to prevent a Trojan virus from infecting your computer. Here are a few of them:

If you are not sure about the sender of an email that suddenly appears on your mail, take time to research something about them. Most Trojan virus infections spread through emails when unsuspecting victims click on an infected link.

Update the Software on Your Computer

Trojan viruses will take advantage of any vulnerabilities that exist on your computer. That is why you should always seek to update any software packages that you have installed because updates usually have security patches.

It is all fun to download stuff on sites such as The Pirate Bay, until one of the “free” comes bundled together with a malware. While the risks are minimal, they are nonetheless real. That is why you need to buy rather than download for free. It is better to be safe than sorry.

If you follow these three safety rules, then your risk of having your computer infected by a Trojan horse virus will decrease substantially.