Everything You Need to Know About the Brave Browser 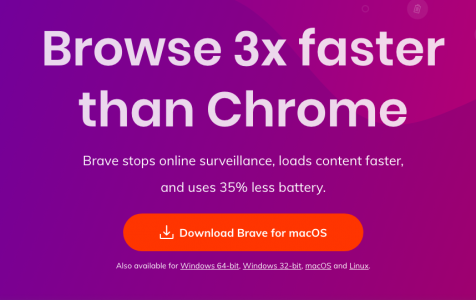 Most major browsers. particularly the popular Google Chrome, are plagued by data and privacy issues because of the amount of data processed and retained by these browsers. Shaking off the Chrome habit can be very challenging for web users since it is the most widely-used browser around the world.

Plus, it is quite difficult to find an alternative to Chrome. In terms of extensions, compatibility, syncing across devices, and speed, Chrome seems to top all the other browsers. But if you look closely, there are several alternatives that are worth trying.

Brave is one of the more popular alternative browsers, partly because one of the co-founders used to be part of the group that kickstarted Mozilla Firefox, and partly because of its very unorthodox business model, which we will explain below.

What Is Brave Browser?

Brave is a standard web browser that allows users to navigate the internet, visit websites, run web apps, and display or interact with online content. And just like other browsers, you can download and install it for free. It also remembers site authentication information and is capable of blocking online ads on web pages.

Brave was developed by Brave Software, a relatively new player in the browser industry, having first launched the browser in early 2016. Its co-founder, Brendan Eich, was the creator of JavaScript and at the same time one of the co-founders of Mozilla Firefox, but he left later on due to pressure.

One of the unique things about Brave is its business model, which some users consider parasitical. This model relies on removing all the ads on every site, then substituting them with ads from Brave’s own network. This is not simple ad-blocking, but more of ad replacement. Imagine a TV network that removes ads from other networks and replaces them with their own ads — this is basically the gist of this business model. This concept was heavily criticized almost immediately by publishers who depended on online advertising for their revenue.

Browsers can be a headache when you want to compare in terms of performance since most of the benchmarks are impossible to relate to actual tasks. But one thing you could look at is the set of features of the browser to help you determine whether it would be useful for you or not.

In the case of Brave browser, let us look at the list of its features below and see whether it’s right for you:

Brave is known for its strong ad-blocking feature, which makes it ideal for those users who are tired of being bombarded by ads wherever they go. What’s more dangerous about this is that most websites and ads are bundled with software that tries to identify you, such as cookies and trackers, that want to monitor your every move across the internet.

Brave also gets rid of all ad trackers, which are tiny scripts used by advertisers and site publishers to identify users and track what other sites you visit or have visited. This enables ad networks to display products similar to ones you bought, researched, or just considered. Brave allows you to browse freely without having to worry about these third-party trackers.

Because there are no ads to load on every page, it means that you can open webpages a lot faster compared to other browsers. According to user reviews, it can be up to three times faster than Chrome, though the website boasts that major news networks load up to six times faster than other major browsers. Just like a PC cleaner, Brave gets rid of all elements that can affect the browser’s performance, such as ads scripts, cookies, and trackers.

If you’re familiar with Chrome’s Incognito mode or other browser’s private mode, Brave comes with its own version of this feature. But Brave’s private mode is more secure than other browsers’ because it allows you to use Tor right in your tab. Compared to other private modes, Tor does not only hide your history but masks your location as well by routing your traffic through multiple servers until it reaches its destination. These servers are encrypted, which adds to the anonymity of your browsing. This feature is only available to desktop users right now, but will soon become available to mobile users in the near future.

Just like most browsers, Brave was built upon Chromium technology, Google’s open-source project. This same project provides the source code for the Google Chrome browser. It is also powered by the same Blink rendering engines and V8 Javascript engine that power Google Chrome.

Because of this, you don’t have to worry about compatibility when it comes to installing Chrome extensions. Brave supports third-party managers, such as 1Password, Dashlane, Bitwarden, and LastPass, as well as PDF readers that display them within the browser. You can check out which extensions you can install under the Extensions tab in the Brave menu.

Brave is a good initiative that has the potential to become a major player in the browser industry. There might be a limited number of extensions available right now, but we believe that it’s going to improve over the years.