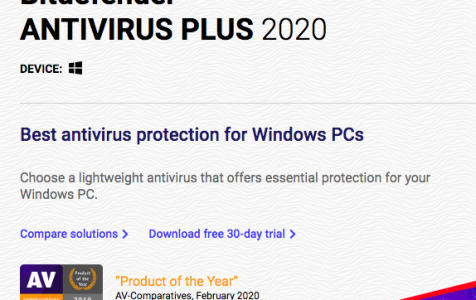 With so many antivirus and anti-malware software in the market right now, it can be confusing for consumers who are looking to find the perfect security software for their computers. In this article, we’ll be looking into Bitdefender Antivirus, one of the most popular antivirus packages today.

What is Bitdefender Antivirus?

Bitdefender is a Romanian online security and antivirus software company that was founded in 2001. Bitdefender designs and develops security applications to protect internet users against a wide range of cybersecurity threats. Bitdefender Antivirus is currently one of the core products offered by Bitdefender. It is packed with a suite of top-quality security features for all types of consumers.

The most popular Bitdefender product is the Bitdefender Antivirus Free Edition, a handy tool that provides basic security protection for Windows users. It includes antivirus, phishing protection, and blocking of scam and other harmful websites.

Aside from the free version, Bitdefender also offers a premium version of its antivirus package, which is the Bitdefender Antivirus Plus. It is the base and the most lightweight security solution. You can also check Bitdefender Antivirus Plus coupon codes and get the best deal. As the name suggests, the software is packed with a lot of useful privacy and security extras. Aside from the basic protection provided by the free antivirus, the commercial versions include an additional layer of protection against ransomware, Wi-Fi scanning to detect network vulnerabilities, online banking protection using a secure browser, secure file removal, scanning for system vulnerabilities, and a secure password manager.

Aside from the main security features, Bitdefender Antivirus also includes a free version of the Bitdefender VPN. Although the free VPN feature is limited to 200MB traffic per day, this should be enough for light internet users.

The Bitdefender Antivirus Plus 2020 comes with a Windows and Mac Anti-tracker browsing extension that could thwart web trackers, so you can browse all you want without worrying about your online privacy.

What Can Bitdefender Antivirus Do?

Bitdefender Antivirus Plus is equipped with a wide range of features that are a mix of basic and advanced. Here are some of the useful features of this security software:

Bitdefender Antivirus Plus 2020 provides users with several scan options. These include:

Bitdefender Antivirus allows users to create new scan types depending on what folders the user wants to scan, schedule the scan, or configure how the scan works using Manage Scans utility. It might not have expert-level technical options as other security apps do, but Bitdefender gets the job done — which is to detect and remove malware from the device.

The number of ransomware attacks keeps increasing over the years, making it one of the favorite malwares of cybercriminals. Bitdefender provides a multi-layered approach to protect your files and device against ransomware. It protects the user’s most important files from being encrypted by ransomware.

This feature is another way to protect the user’s important files against unauthorized changes. You just need to create a personal watch list and add the folders you want to monitor to this list. For example, you can add your Documents or your Photos folder to the watch list and you’ll be notified whenever a program tries to make changes to any of the files on those folders. Bitdefender constantly monitors the folders on this watch list to prevent ransomware and other types of malware from modifying or deleting them. You can also specify which applications can access your Safe Files vault.

Protection Against Phishing, Fraud, and Other Harmful Websites

Aside from the anti-malware protection brought by the antivirus solution, Bitdefender also protects users from harmful websites such as scams, malvertising, or those websites filled with adware.

If you’re wary of keyloggers and spyware who are out to steal your financial information or login details, Bitdefender offers a safer way to do online banking through Safepay. This unique, dedicated browser allows users to shop and process financial transactions in a secure manner. It can also automatically fill out your financial, credit card, or banking details so that you don’t have to type them manually.

It can be annoying when a notification pops up when you’re in the middle of a game or a message suddenly appears when you’re watching a movie. Bitdefender has a way of detecting when you’re playing games, watching a movie, or working so that it won’t bother you with unnecessary notifications and requests. This allows users to focus on what they are doing. The security software Bitdefender temporarily stops pop-ups, manages visual settings, and quits unimportant background processes to allow the user to maximize the computer’s resources.

Pros and Cons of Bitdefender Antivirus

However, it could do a lot to improve its VPN access feature. Right now, the unlimited Bitdefender VPN feature can only be accessed through a separate subscription. It is also missing parental controls and other customization features. Bitdefender Antivirus is also lacking in system optimization tools, such as a PC cleaner or a Mac management tool.