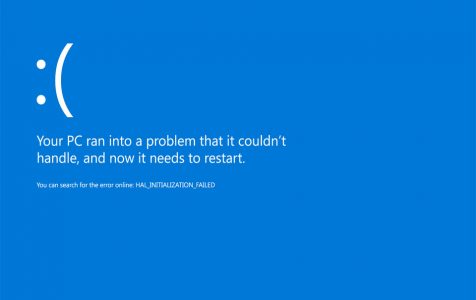 One of the scariest errors many Windows users are horrified of is the Blue Screen of Death or BSoD. It happens when your computer encounters an error that the system cannot resolve and therefore needs to restart.

BSoDs can be caused by different problems, such as incompatible or outdated drivers, faulty hardware, power supply problems, a corrupted BIOS, missing Windows Registry entries, or the overheating of components. When a BSoD occurs, your computer automatically reboots itself to try to fix the issue. But if your problem is something that a simple refresh of the system cannot solve, your computer can be stuck at BSoD or restarting in a loop.

However, Blue Screens of Death aren’t that scary if you know what’s causing the problem. A BSoD is usually characterized by a blue or black screen, an error message and a stop code. So whenever you encounter this problem, make sure to take note what the error message and stop code are so you have an idea how to fix the problem.

What Is ‘System Thread Exception Not Handled’ Error in Windows?

One of the most common BSoD problems that plague the Windows operating system is the SYSTEM_THREAD_EXCEPTION_NOT_HANDLED error. Several Windows users have posted this issue on various forums and discussion sites to find a definite fix.

One user reported that he encountered this BSoD under different circumstances so he could not determine exactly what caused the issue. The error happened whenever he was playing games, browsing the internet, shutting down the computer or even when he was not doing anything at all.

For instance, the Windows 10 KB4467682 update released last November 27, 2018 has been reported to cause BSoD with the “System thread exception not handled” error. Microsoft has already acknowledged the issue and promised to release a fix in the upcoming December 2018 security update.

So if you’ve encountered a blue screen error, don’t panic. This article will show you several ways to deal with “System thread exception not handled” in Windows.

How to Fix ‘System Thread Exception Not Handled’ Error in Windows

The first thing you need to do when you get the BSoD with the “System thread exception not handled” error is to clean up your system by deleting all unnecessary files. Junk files can sometimes interfere with your processes and cause problems for your computer. You can use an app such as Outbyte PC Repair to completely remove all junk files from your computer.

And don’t forget to back up your important files in case something goes wrong.

If you encountered the blue screen of death and your computer was able to restart normally after the BSoD occurred, you should check Device Manager first for corrupted drivers. To see if there’s something wrong with your drivers, follow the steps below:

You might need to restart your computer for the changes to take effect.

If your computer is stuck in a restart loop and can’t boot normally, the only way to fix your system is by booting into Safe Mode. Once you’re in Safe Mode, you can uninstall the graphics card driver or another malfunctioning driver, then replace it with the latest version from the official website.

Here are the steps you need to take to interrupt the boot process and go into Safe Mode:

Restart your computer into normal mode to allow the changes to take effect, then download the latest version of your graphics card driver and install it on your PC.

The process might take a while to complete depending on how big your system is. Plug in your computer to make sure it doesn’t turn off in the middle of the verification process.

The Blue Screen of Death may sound like the title for a popular horror movie, but it’s not really as scary as it sounds. It’s just your computer’s way of telling you that there’s something wrong somewhere within its system. So the next time you get a BSoD with the ‘system thread exception not handled’ error, you can use any of the methods listed above to resolve the problem and get your computer back up and running again.

Jesse
Leave a Reply Cancel reply
Featured Stories
Outbyte, Auslogics & CCleaner – The Top 3 PC Optimizers in 2021
PC Repair Windows 10 months ago
Best Choice for Updating PC Drivers
PC Repair Windows 3 years ago
More Stories
How to fix “We could not complete the install because an update service was shutting down”
Windows 4 days ago
7 Ways to Fix Error 0x80070091: The directory is not empty
Windows 4 days ago
Step-by-Step Guide to Fixing Error 0x80070003
Windows 5 days ago
How to Fix Issues When You Use Scanpst.exe?
Windows 6 days ago
How to get rid of “The digital signature for this file couldn’t be verified” error?
Windows 1 week ago
How to Get Rid of the 0xc00d36c4 Video Error Code
Windows 1 week ago
How to Deal With Windows Update or Firewall Error 0x8007042c
PC Repair Windows 2 weeks ago
DOWNLOAD OUTBYTE PC REPAIR NOW!