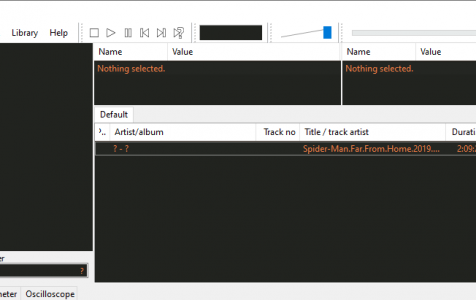 Contents hide
What is Foobar2000?
Foobar2000 Pros and Cons
How to Use Foobar2000
Summary
Quick PC Scan

There are many media players for various devices in the app market today, dominated by the well-known names of iTunes, VLC, Kodi, Media Player Classic, and RealPlayer, to name a few. The software we’re going to dissect this time may not be one of the most popular media player apps in the market right now, but it is one of the best choices for media playback purposes.

Foobar2000 may not look posh like other apps, but it is able to deliver superb quality music without straining your computer resources. It is a powerful and flexible media player that is on par with its more popular contemporaries in terms of features and performance.

Foobar2000 is a free powerful and flexible music player developed by Peter Pawlowski, known for its unique modular design, customizable interface, and a wide range of hidden features. It was released in 2002 and is now available for Windows, iOS, and Android devices.

Foobar2000’s main function is media management and music playback. But it also specializes in ripping and converting CDs. It copies the tracks on your discs, tags them automatically, and keeps all entries neatly organized using an efficient media library system. It is primarily a music conversion and playback app, and it is incredibly well-designed and adaptable.

The Foobar2000 media player does pretty much everything it promises to do. But one of the most amazing features of the application is that it is open for developers to create plug-ins and extensions that could add even more features.

By default, the app has a number of music-tweaking effects available for users to play with, such as the all-important equalizer. Aside from this, you will also find a downmixing option, a crossfader, and some resampling tools.

When you first open the app, it is normal to be a little taken aback by how the user interface of Foobar2000 looks like. It seems rather outdated at first sight and the interface looks very sparse. But, once you’ve pointed the app in the direction of your audio collection and the music library has been populated, it becomes a lot easier to understand how things work.

If you’re particularly concerned by the look of the music player, you can take advantage of the Theme Editor to personalize the app according to your liking.

Once your music has been imported into your library, you will be able to play your tracks by browsing the entries by artist or album. You can also create your own playlist. In fact, the Foobar2000 media player makes it easy to open multiple playlists available simultaneously, with each playlist conveniently opened in its own tab.

Foobar2000 is well known to be a great-functioning music player, but its best perk is probably the low RAM and CPU usage. Even when you have the app opened the whole time, it won’t affect your computer’s performance. This makes it perfect for just about any type of device — from a small netbook to a smacking 8-core computer setup.

But despite everything that the Foobar2000 media player has in its favor, there is no denying the fact that it requires a bit of a learning curve. Foobar2000 is not a piece of software that beginners can just jump into and be familiar with straight away. You will need some time to familiarize yourself with the features and how the app works. But once you’ve got used to the way things operate and you’ve spent some time playing around with the features of the app, you can weave your way into the music player and allow it to work its magic.

One of the best things about Foobar2000 is that it is completely free. You can download it from the Foobar2000 website, and the file is less than 5MB in size. When you install the app, you’ll be asked first what type of installation you want to perform: standard or portable.

A standard installation installs the Foobar2000 media player for all the users of the computer. What keeps Foobar2000 apart from other media player apps is that it does not force you to install all the components of the app. You can choose to do a full install, which includes the full app with the optional features, shortcut icons, and other extras that would improve your music experience. The optional features include the Converter, equalizer, resamples, online tagger, replaygain scanner, and others. Or you can choose to install what you only need.

The other type of installation, the portable install, only stores the application folder and does not modify your registry. This is great if you have a drive full of portable apps that you use when switching computers. But whatever type of installation you go for, the Foobar2000 is definitely a great addition to your apps.

Here’s a tip: Although Foobar2000 might not take up much storage space on your hard drive or your USB drive, your music library definitely will. So make sure to free up some space by cleaning out your junk files using a PC cleaning app. If you’re going to install it on a thumb drive, you need to scan the USB first with an anti-malware app to make sure that it is totally clean before connecting it to other computers.

Unlike other media players, Foobar2000 allows users to rearrange UI elements to make the app truly fit the user’s style. But if you don’t feel like improving the looks of the interface and you just want to play your music right away, you will be presented with a couple of preset layouts during the first run after installing.

Foobar is packed with a few handy features which any music lover would love. One of these features is the equalizer, which lets you use not only five or ten bars like in other players, but up to 17 bars to truly customize the playback that you want to hear. You can also save or load presets to personalize different equalizer settings for every genre or artist. There is also the 18th bar which you can use to decrease or increase the decibels.

For the true geeks, the creators of foobar have installed a small window, which is called Console. No, unlike the ordinary console that most users know, this one is not used to input playback commands by text. Instead, it has a Write Log where you can monitor what you have been doing with the app. This feature is great for figuring out which settings you were using in the past or for monitoring the other users on your computer.

It also has an Edit menu located at the top bar nicely surprises with an incredibly useful feature. It allows you to remove duplicates, songs that can no longer be found, corrupted tracks, songs that do not open properly, and other types of “dead” songs.

Foobar2000 may not be as good-looking as its popular contemporaries, but it is still worth downloading for several reasons. It is free, compact, and provides great music playback which every music addict won’t say no to. It also has a great converter and tagging features that other media players don’t have. Plus, you can install it on your USB thumbdrive and bring your music wherever you go.