Home » Windows » How to Play Silent Hill 3 on Your Computer

How to Play Silent Hill 3 on Your Computer 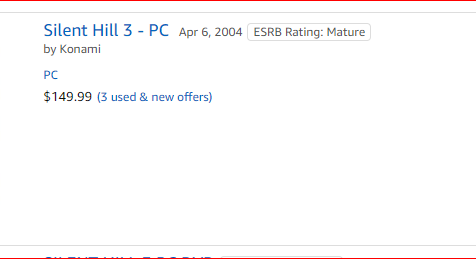 Contents hide
Where to Get Silent Hill 3
How to Play Silent Hill 3 on Your PC
Once you have a copy of the game, all you need to do is run the installer and follow the on-screen instructions. The minimum requirements of the PC version of the game are:
To do this:
Silent Hill 3 Problems on PC
And if you’re using a 1080p resolution, make sure that the following values are followed:
Summary
Quick Fix

Silent Hill 3 is the third installment of the series and is a sequel to the first Silent Hill video game. Released in May 2003, it on Heather Mason as the main character, the first female lead of the series. It celebrate s its 15th year anniversary this year and is considered an unsung classic in the video game industry.

However, the game is not available online, which means you have to buy the actual CDs or DVD to play Silent Hill 3. The North American version of the game is featured in 5 CDs while the European PC version has one DVD.

Where to Get Silent Hill 3

The game was developed by leading Japanese game development company Konami. Since its release 15 years ago, it has been difficult to find a physical store or online store where you can get the CDs or DVD in new condition. You can buy pre-owned CDs and DVDs of the game through online stores; you can get them from Amazon for as low as $149 or from Ebay for $156.

There are, however, users who have uploaded an unofficial copy of the game to torrent or file sharing sites. The cracked version includes a no-CD patch so users could play the game even without CDs or DVDs.

But since the game was designed for older versions of Windows (Windows XP, Windows 7, Windows 8 and Vista), players need to install Silent Hill 3 PC Mods to overcome the graphical restrictions commonly encountered by older games.

How to Play Silent Hill 3 on Your PC

Once you have a copy of the game, all you need to do is run the installer and follow the on-screen instructions. The minimum requirements of the PC version of the game are:

If you are using the physical version of the game, make sure that the DVD or CD remains inserted throughout the game, otherwise it won’t work. If you don’t want to use the CD or DVD, you can download and install a no-CD patch which you can find from game download sites.

If you want to improve the game’s speed and resolution, you can install Silent Hill 3 PC Mods. To get the HD textures, you can also install an SH3 Field of Vision (FOV) tool to adjust the display to fit your screen properly, especially if you have a widescreen monitor or TV.

Just download the FOV tool and drop it into your Silent Hill 3 folder. Create a shortcut on your desktop for easy access. Whenever you want to play SH3, open the FOV tool first to adjust your settings, launch the game, then press * to apply the changes to your screen. You might need to adjust the settings a couple of times to get the perfect fit.

Once you’ve configured your FOV tool, the next step is to edit the disp.ini file in the Silent Hill 3 folder to allow textures to render at a higher resolution, such as 1080p.

After you have edited the disp.ini file, you can then change the game’s rendering resolution to your computer’s highest capacity, which is 4096×4096.

Once all these steps are done, just launch the game and enjoy playing Silent Hill 3.

Because Silent Hill 3 is an old game made for older machines, it isn’t surprising for some problems to turn up.

Here are some of the common Silent Hill 3 problems on computers and how to fix them:

Inconsistent FPS. When the frame rate keeps dropping and the game doesn’t play smoothly on your machine, the first thing you need to look at is your graphics card. Since the game was created for older graphics card, an incompatibility cannot be avoided altogether. Visit your graphics card settings and manage your 3D settings.

You can also use SH3Proxy with a v-sync toggle. Just copy the sh3proxy.ini and d3d8.dll into the game’s main folder. Open the sh3proxy.ini using Notepad and look for the vsync line. Enable v-sync by changing the value from 1 to 0.

And if you’re using a 1080p resolution, make sure that the following values are followed:

If this doesn’t help, try optimizing your PC by deleting junk files regularly. These unnecessary files can sometimes interfere with your processes and cause glitches in the middle of the game. Deleting these junk files resolves these issues most of the time not only for SH3, but for other games and apps as well. You can use an app such as Outbyte PC Repair to get rid of all trash on your computer, as well as maximize your RAM for a better gaming experience.

Silent Hill 3 may be old, but nothing beats playing a classic video game like it. Even though the game was designed for older Windows systems and hardware, you can apply the tweaks above to successfully launch the game and enjoy a unique gaming experience.