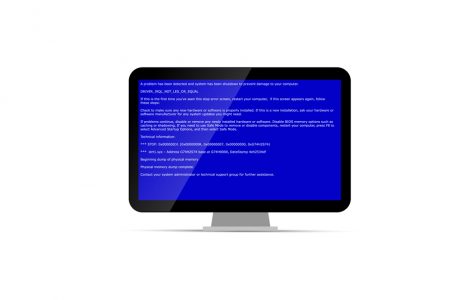 Your screen suddenly turned blue, and you are seeing a message with an error code. What should you do?

Well, a Blue Screen of Death or a BSOD can be quite alarming, especially if you don’t know what’s causing it. However, there’s no need to panic because a BSOD is a pretty common occurrence among Windows 10/11 devices.

A BSOD appears because of a software or a hardware problem. Regardless of what’s causing it, you simply need to apply some minor or major tweaks, and the error should be resolved.

In this article, we will tackle one particular BSOD that’s giving headache to many Windows users: the DATA_BUS_ERROR BSOD.

DATA_BUS_ERROR is one of the many known BSOD errors in Windows. It can appear in the latest Windows XP and Windows 10/11 devices. This BSOD error has the 0x0000002E stop code, which suggests that a parity error in the system memory exists.

What Causes DATA_BUS_ERROR in Windows 10/11?

The error is hardware-related, meaning it can be triggered by a configuration issue, a problematic hardware component, or an incompatible hardware component. It may also surface because of a defective RAM or a malware attack. It could also be the case of a bad RAM or memory cache errors.

In general, Windows 10/11 computers can troubleshoot BSODs. But if it cannot resolve the problem on its own, your best option is to use other solutions.

If you encountered the DATA_BUS_ERROR BSOD, you may try the solutions we’ve recommended below in no particular order. Check if any of them resolves the problem.

As stated above, issues with the computer’s memory can trigger this BSOD error. If you suspect that you are experiencing the DATA_BUS_ERROR because of a memory issue, then try running a memory test. If the test says that the RAM is at fault, then replace it.

To run a Memory Test, the Windows Memory Diagnostic Tool will be used. It is a utility designed to check for possible memory issues in the RAM.

But before you even try running a memory test, check your RAM stick first. Perhaps it’s causing the error. Remove it from its slot and check if the error shows without it.

Should you decide to pursue the memory test, follow these steps:

Device driver manufacturers like Dell, Lenovo, Intel, and AMD, have released special software products that are designed to download device drivers for their respective brands. You can download them on their official websites.

Via a Third-Party Driver Updater Tool

All you need to do is download a trusted driver updater tool from a legit source and install it onto your Windows 10/11 device. Once you have downloaded one, launch it and let the tool do the task of updating your device drivers on your behalf. It’s that easy!

Fix #3: Use the CHKDSK Utility.

The CHKDSK utility is an inbuilt Windows 10/11 tool that is widely used to resolve BSOD errors like the DATA_BUS_ERROR. To use it, follow these steps:

A virus or a malware entity could have invaded your Master Boot Record (MBR), or the section in your hard drive that tells Windows how it is set up and partitioned. If you suspect that this is your case, then you may need to use a reputable antivirus program to scan your MBR and resolve the issue.

If you’re running Windows 10/11, then you’re in luck. Your computer already has a built-in utility that protects it from malicious entities like viruses. This utility is called Windows Defender.

To use Windows Defender to perform a virus scan, refer to the steps below:

You also have the option to use an effective third-party antivirus software program or use one alongside Windows Defender. Install the third-party software onto your Windows 10/11 device and perform a complete scan for best results.

As already mentioned, BSOD errors like the DATA_BUS_ERROR are pretty common occurrences in the Windows platform. Therefore, they shouldn’t be something you should be scared of. With the fixes we have enumerated above, you should be able to resolve BSOD errors in no time.

If you are dealing with the DATA_BUS_ERROR, you simply need to run a memory test. If the test says that your RAM is faulty, then consider replacing it. But if replacing the RAM doesn’t get rid of the error, then proceed with updating your device drivers or performing a virus scan. If all else fails, consider using the CHKDSK utility.

However, if you feel that the BSOD error that you’re facing is way too difficult to handle on your own, it won’t hurt to seek help. Contact Microsoft on their official website or reach out to the device driver’s support team.

Did we miss some important things that our readers should know about the DATA_BUS_ERROR on Windows 10/11? Please let us know in the comments!