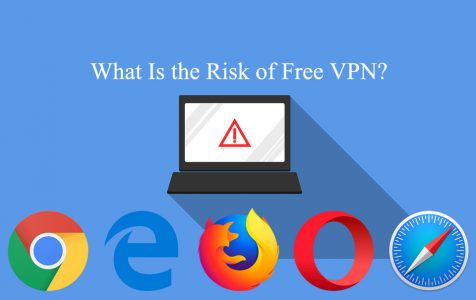 Contents hide
But first, what’s free VPN?
The myth of free VPN
Take a look at the two categories that free VPNs can be broken down into:
The untold risks of free VPN
Now, let’s get to the biggest risks and dangers of using free VPNs:
Free VPNs are probably not worth the risk
Remove Now

There’s much buzz surrounding free VPN services, and for a good reason: a free Virtual Private Network (VPN) gives you access to a VPN server network and the necessary software without having to shell out money. But is free VPN all the nice, harmless things it is painted to be?

This article will guide you through the risk of free VPN, from free VPN leaks to that much dreaded VPN malware.

VPN software creates an encrypted connection, typically referred to as a tunnel, between your computer and a server that’s controlled by the VPN company. It then passes all network activity through the guarded tunnel. What this means is even though you are using an airport’s WiFi network, none of the other individuals on that network can view what’s taking place inside that tunnel.

Not only does this make your data safe from intruders on the network you’re connected to, but advertisers and unauthorized online entities are also unable to see your actual IP address or confirm your current location. What they will see instead are the IP address and location information for the VPN server, keeping even your ISP – which can try to sell user information about you – in the dark.

As no technology is 100 percent foolproof, your traffic can eventually be tracked and even intercepted once it exits from the VPN server, particularly if you’re linked to sites that aren’t using HTTPS. Even intricate timing algorithms can be deployed to predict when as well as where you leave the encrypted tunnel.

The myth of free VPN

Many experts are quick to point out the age-old adage: there’s no such thing as a free lunch.

This means that someone could be paying quite a cost for so-called free VPN. These services, after all, come with high recurring costs, and maintaining VPN servers worldwide is rather expensive to support and maintain, as well as to update and develop in the first place. A VPN service entails servers and data lines, or you’re actually paying a cloud vendor for every bit that’s received, sent, and then stored.

Take a look at the two categories that free VPNs can be broken down into:

Whether it costs money or personal data, it turns out that free VPN isn’t free at all – someone has to pay for it, and there’s a good likelihood that that person’s going to be you.

The untold risks of free VPN

Now, let’s get to the biggest risks and dangers of using free VPNs:

Free VPNs are probably not worth the risk

There are a number of well-meaning institutions and groups such as activists and universities that offer free VPNs. The problem, though, is they’re also suffering from a strain in resources, which is bound to lead to slowdowns or stoppages. It’s not also entirely impossible for them to harvest personal user data for future use in their own agendas.

The cost of identity theft is becoming steeper by the day, both in out-of-pocket expenses and in the time and hassle involved in cleaning up the mess. In this day and age, your personal credentials are worth more than gold, and it takes due diligence to keep them safe.

Add these to the fact that free VPNs have baggage, quality issues, and their own motives.

At the end of the day, it’s your personal choice to use a free VPN service. What we’re trying to achieve here is good education for you to arrive at smart, informed choices. You can, for example, check out VPN comparison resources online to get hold of reliable VPNs and become familiar with the latest issues.

In choosing a reputable VPN provider, you’re assured of getting the protection you need on top of safe and secure internet surfing and the benefits of VPN access on several computers or devices. On the security front, you’re guaranteed of high-speed connection with unlimited bandwidth, no activity logging, military-grade AES-256 encryption, and the ability to bypass firewalls and internet censorship. You’re off to a great, easy start in installation and setup, updates and support, and access from multiple devices across all platforms.

What do you think is the ultimate risk of free VPN? What’s your own experience with these risks? Let us know in the comments section below!

Leave a Reply Cancel reply
Featured Stories
Outbyte, Auslogics & CCleaner – The Top 3 PC Optimizers in 2021
PC Repair Windows 2 years ago
Best Choice for Updating PC Drivers
PC Repair Windows 4 years ago
More Stories
How to Choose a Cloud VPN for Your Business
VPN 7 months ago
How You Can Use Your Android to Earn Free Money
VPN 7 months ago
A Guide to Getting and Testing Residential Proxies
VPN 8 months ago
How to Improve Your Gaming Experience by Using VPN
VPN 9 months ago
6 Most Important Features of Secure VPN Software
VPN 11 months ago
Top 14 Proxies for ExtraTorrents
VPN 12 months ago
Double VPN: Differences from Classic VPN, Pros and Cons
VPN 1 year ago
Categories