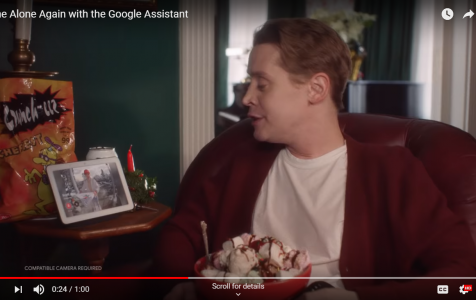 More than two decades ago, we met the clever Kevin McCallister in the film Home Alone, one of the highest-grossing Christmas flicks of all time. Now Macaulay Culkin reprises his role, going Home Alone again in Google’s new ad.

The American actor remade some of the popular scenes from the holiday classic flick in the new series of ads for Google Assistant, which dropped last December 19.

What the new Google ad with Macaulay Culkin is likely telling us is that it’ll be easier for Kevin this time to execute his nasty tricks, thanks to the device.

As for Culkin, the whole experience felt nostalgic, and for him, it was really interesting to go back and remake some of his iconic scenes. He was even impressed with everyone’s effort, seeing all the props and decor on the set. “They did a really good job on the set decoration and the props,” he said in a recent interview.

The Google Assistant Ad You Need to See This Holiday Season

It’s undoubtedly a cute ad, featuring Culkin seeking help from Google with some of his popular bits from the movie.

The ad starts with a grown up McCallister trying to get through his day in his parent’s huge house , much like what he did in the film. However, this time, he has Google Home Assistant and some other smart devices to help him get by.

When he woke up, he asked Google Assistant to check his calendar. It replied, “You have one event called ‘house to yourself’.” From there, he sought help from the Assistant to remind him of some important to-do tasks, including the addition of aftershave to his shopping list, to wait and check the front door for his pizza delivery (already paid for online ), to remind him to clean his bed sheets, to adjust the temperature at home, and to begin Operation Kevin.

Yes, Operation Kevin. Who could forget that cinematic routine? The concept was pretty much similar, but this time everything was automated and more advanced, thanks to Google Assistant. The routine included automated tasks, such as locking the door, turning on the lights for protection against thieves, moving around a piece of cardboard, and making sure the bandits don’t stand a chance.

Of course, the operation was the main highlight of the film , as Kevin tried to fend off the pesky burglars with some traps and tricks. Too bad that the ad already ended before the Assistant could prove just how smart it could be.

Aside from Operation Kevin, the ad highlighted the appearance of an improved Pixel device that has an edgy display and no notch, as well as some other technologies like Nest Hello Doorbell, which allowed him to pay for the pizza online. Thanks to these devices, Kevin had easy access to practically everything that he needed to launch Operation Kevin and scare away the burglars in such a Christmasy way.

For a limited time, Google is adding some Home Alone-inspired integrations to Google Assistant. These integrations can be triggered using some quotes from the film. For instance, if you ask, “Hey, Google. Did I forget something?” Google will then scream in response, “Kevinnnnnnnn!”

Here are other iconic quotes from Home Alone and the responses you’ll get. To experience them yourself, just say “Hey Google” followed by:

If you’ve watched the ad, you’ll probably agree with the underlying moral: Google Assistant can help streamline your tasks, so you can have more time to do the things you love, of course with the people you love.

Just so you have a convenient and hassle-free experience with Google Assistant, especially with Google Pixel, you can try to install Outbyte Android Care. This amazing app has amazing features that may come in handy with Google Pixel, such as the Security Scan feature that allows you to scan all the installed apps and check those that are subject for intrusion. Kevin might not have used this app yet, but we can guarantee its efficiency.

What do you think about the new Google Assistant ad with Macaulay Culkin? Let us know below!