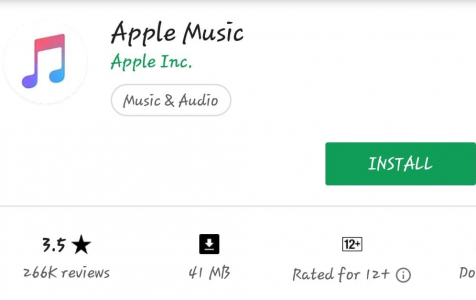 Apple Music is a great app for organising your playlist and playing your favourite songs, ad-free. Three years ago, Apple began testing the water by making its Apple Music app available for Android.

With Apple Music for Android, music lovers who are using non-iOS devices can enjoy listening to 50 million songs, tune in to the live radio on Beats One, and access music they have purchased on iTunes on an Android device.

However, after the initial excitement, the app did not really turn out to be a popular option among Android users. The number of Android subscribers is low er than expected and Apple Music apparently isn’t getting that much love from the Android community.

This new update allows Apple Music to work better with larger-screen Android tablets. With version 2.7, the Apple Music app has adapt ed to the increased display area and takes advantage of the added room to show more albums, featured artists, songs, and playlists than what was originally available in the previous app layout.

Here’s a summary of the changelog for the 2.7 update as posted on Google Play Store:

The most obvious change in the new update is the layout and design of the Apple Music app . Instead of the old collapsible hamburger menu featured in version 2.6.1, the new interface features a more practical bottom bar navigation. This allows the Apple Music layout to easily adjust to the larger display.

The bottom bar navigation menu looks almost the same as the one available on the iOS app, except for minor differences. In the new interface, the search function is still located in the top right corner of the screen, but the Library, For You, Browse, and Radio shortcuts are all found at the bottom.

The new navigation bar makes it easier for users to access various features of the app. Instead of clicking the hamburger menu and then choosing from the dropdown options, Apple Music Android users can now get to their favorite feature with just one click.

With Apple Music’s new update, the iOS music streaming competitor of Spotify is one step closer to being a more ubiquitous service.

How Use Apple Music on Android

Just like any iOS product, you need an Apple ID to start using this streaming service. You can use your existing Apple ID if you have one. If you’ve never used Apple’s products before, you can create a new Apple ID within the Apple Music app or via iCloud.com.

Apple Music has a wide selection of songs you can choose from to stream online. But for those times when you are not connected to the internet, you can download songs or albums for offline listening. However, you need to make sure that you have enough storage space to download the song files.

Here’s a tip: Delete all the junk files on your Android device to make room for the songs you want to download. You can manually delete them, which means going through every nook and cranny of your device, or you can use an app such as Outbyte Android Care to get rid of all the trash in one click.

Take note that doing this will use more of your data and will require a stable 3G or 4G connection. If you’re having network problems, it’s best to keep this feature turned off.

Given how popular Android is, this new update for Apple Music for Android will benefit a lot of users and expand the app’s reach beyond iOS. The new tablet-friendly interface is a welcome change as Apple expands its native support for other platforms.